The sixth child of John Marshall Clemens and Jane Lampton, Twain lived in Florida, Missouri until the age of four, at which time his family relocated to Hannibal in hopes of improving their living situation.

By lineage, Twain was a Southerner, as both his parents’ families hailed from Virginia. The slaveholding community of Hannibal, a river town with a population of 2000, provided a mix of rugged frontier life and the Southern tradition, a lifestyle that influenced Twain’s later writings, including the Adventures of Tom Sawyer.

Few black slaves actually resided in Hannibal, and the small farms on the delta were no comparison to the typical Southern plantation. In Hannibal, blacks were mostly held as household servants rather than field workers, but were still under the obligations of slavery.

In his youth, Twain was a mischievous boy, the prototype of his character, Tom Sawyer. Though he was plagued by poor health in his early years, by age nine he had already learned to smoke, led a small band of pranksters, and had developed an aversion to school.

Twain’s formal schooling ended after age 12, because his father passed away in March of that year. He became an apprentice in a printer’s shop and then worked under his brother, Orion, at the Hannibal Journal, where he quickly became saturated in the newspaper trade. Rising to the role of sub-editor, Twain indulged in the frontier humor that flourished in journalism at the time: tall tales, satirical pranks, and jokes.

However, over the next few years, Twain found himself unable to save any wages and grew restless. He decided to leave Hannibal in June of 1853 and accepted a position in St. Louis. Soon afterwards, rather than settling in St.

Louis, Twain proceeded to travel back and forth between New York, Philadelphia, Washington, and Iowa, working as a journalist. After his wanderings, Twain ultimately switched professions, realizing an old boyhood dream of becoming a river pilot.

Under the apprenticeship of Horace Bixby, pilot of the Paul Jones, Mark Twain became a licensed river pilot at the age of 24. Earning a high salary navigating the river waters, Twain was entertained by his work, and enjoyed his traveling lifestyle. In 1861, with the beginning of the Civil War, Twain’s piloting days came to an end.

After returning home to Hannibal, Twain learned that military companies were being organized to assist Governor Jackson, and he enlisted as a Confederate soldier.

Within a short period, he abandoned the cause, deserted the military, and along with thousands of other men avoiding the draft, moved West.

On his way to Nevada, twelve years after the Gold Rush, Twain’s primary intentions were to strike it rich mining for silver and gold.

After realizing the impossibility of this dream, Twain once again picked up his pen and began to write.

Twain joined the staff of the Virginia City Territorial Enterprise, and became an established reporter/humorist. In 1863, he adopted the pseudonym Mark Twain, derived from a river pilot term describing safe navigating conditions. In 1869 he published his first book of travel letters entitled Innocents Abroad. The book was criticized widely and discouraged Twain from pursuing a literary career. In the years that followed, Twain published various articles, made lecture circuits, and relocated between San Francisco, New York, and Missouri. During this time he also met Olivia Langdon, whom he married on February 2, 1870. In November of the same year, their first son, Langdon Clemens, was born prematurely.

The Clemens family quickly fell into debt. However, when over 67,000 copies of Innocents Abroad sold within its first year, the American Publishing Company asked Twain for another book.

Upon Olivia’s request, the couple moved to the domicile town of Hartford, Connecticut, where Twain composed Roughing It, which documented the post-Gold Rush mining epoch and was published in 1872.

In March of 1872, Twain’s daughter Susan Olivia was born, and the family appeared prosperous. Unfortunately, Langdon soon came down with Diphtheria and died. Twain was torn apart by his son’s death, and blamed himself. Moreover, Roughing It was only mildly successful, which added to the family’s hardships.

After traveling to Europe for a lecture series, Twain experienced a turning point in his career. Twain’s newest novel, The Gilded Age, written in collaboration with Charles Dudley Warner, was published in 1873.

The novel is about the 1800s era of corruption and exploitation at the expense of public welfare. The Gilded Age was Twain’s first extended work of fiction and marked him in the literary world as an author rather than a journalist.

After the broad success of The Gilded Age, Twain began a period of concentrated writing. In 1880, his third daughter, Jean, was born. By the time Twain reached age fifty, he was already considered a successful writer and businessman.

His popularity sky-rocketed with the publications of The Adventures of Tom Sawyer (1876), The Prince and the Pauper (1882), and The Adventures of Huckleberry Finn (1885). By 1885, Twain was considered one the greatest character writers in the literary community.

Twain died on April 21, 1910, having survived his children Langdon, Susan and Jean as well as his wife, Olivia. In his lifetime, he became a distinguished member of the literati, and was honored by Yale, the University of Missouri, and Oxford with literary degrees.

Perhaps more than any other classic American writer, Mark Twain is seen as a phenomenal author, but also as a personality that defined an era. 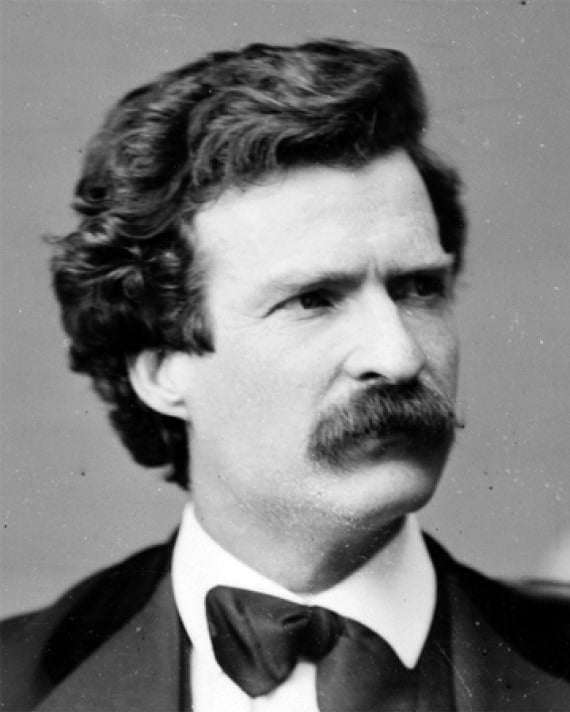